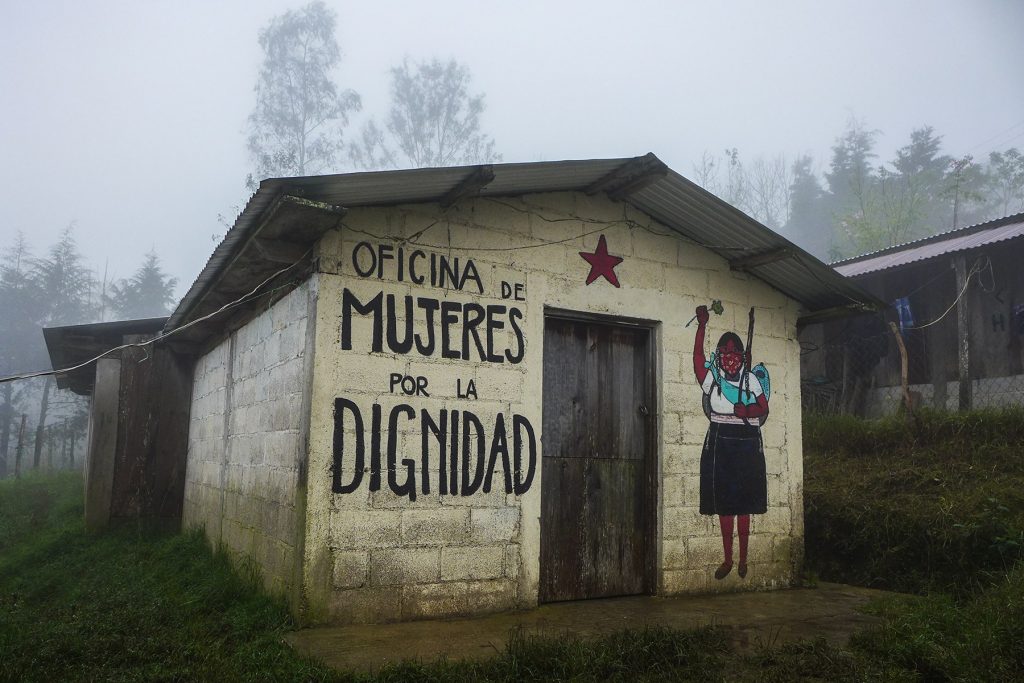 It’s foggy when the sun first hits the horizon. Like smoke rising from the milpa it bears itself over the Chiapan highlands. I sit motionless on a crowded second class bus from Palenque.  Eyes peeled out the window in disbelief. There’s a road blockade, I’m in Zapatista country and I could burst with excitement.

It’s Jan 1, 1994 when an indigenous movement was born out of this highland jungle. Storming the Zocalo or main square in nearby San Cristobal de las Casas and surrounding pueblos to declare their human rights and protest the years of impoverishment, broken promises and ongoing marginalization at the hands of the Mexican government. This movement would take the world by storm. This movement would inspire uprisings against corporatocracy, state repression and ongoing planetary plunder from the Battle in Seattle to Idle no More, from global indigenous movements as close as Guatemala and as far away as Australia.

I have come in search of the women’s textile cooperatives I read about in Hilary Klein’s Companeras: Zapatista Women’s Stories. I have come in search of autonomous villages and the birthplace of Comandanta Ramona, a trailblazing icon for women’s equality in the EZLN movement, whose black masked video image standing at barely five tall before hundreds of thousands in Mexico City’s zocalo still gives me shivers down my spine.

Klein’s book recounts the building of women’s cooperatives in the region and how they have lead to economic liberation and collective empowerment. Previously, women couldn’t leave their house without their husbands’ permission and today all indigenous women owned and lead cooperatives are handed down to the next generation. This is a hard earned victory of the movement: changing gender roles and demanding a voice and a place for women outside the home, putting the value back into traditional Mayan craft and culture by duly rewarding its female makers. Not that there aren’t a plethora of victories yet to be won and improvements to be made…

I was almost in tears when we rounded the corner into the small bus depot in Ocosingo half way to San Cristobal. She was sitting there, decked in bright woven colour, two large braids sat on either side of her head, hand woven baskets were piled to one side on the pavement beside her. She smiled at me the warmest smile, kindness radiating with a revolutionary twinkle in her eye. Her aire of contentment was contagious. And that’s when I knew I was in the right place. That she had been waiting for me. That another world is possible. 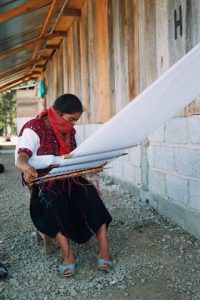 The amazing global success story Cooperativa Jolom Mayaetik, an all indigenous, women owned and operated traditional Mayan weaving cooperative outside San Cristobal, work at political, social and economic levels in their communities to eradicate racism, poverty and marginalization. Check them out and practice your Spanish!

Who is Permaculture Artisan?

Hi, I'm Dalia and I love to travel, handmake all things slow textiles like plant-based dyes, local wool knits and felts, write and practice permaculture beyond solely food production. Here you'll find my latest and greatest adventures in a quest to celebrate and reclaim making with nature and inspire an ecological renaissance. Find me on Facebook and Ravelry by searching "Wildcrafted Wool."

Despite the many definitions, here goes...Permaculture is a contraction of the words "permanent," and “culture.” It advocates developing permanent, self-sufficient systems based on natural ecosystems. Developed by Australian ecologists Bill Mollison and David Holmgren in the late 1970's, it originated as a solution to the destructive and toxic agri-industry. Permaculture means whole regenerative design that nourishes people, planet and soul ecologically, socially, and economically.

Afoot and light-hearted I take to the open road,
Healthy, free, the world before me,
The long brown path before me leading wherever I choose...

“Art is not a mirror to reflect reality, but a hammer with which to shape it”—Bertolt Brecht

“It is not the strongest animal that survives, nor the fastest but the one most adaptable to change” –Leon C. Megginson, paraphrasing Charles Darwin

“…the individual artist moves from the private narratives of self to the public discourse of art as a tool to empower and transform the lives of women and their communities…I have found the intense need to live in beauty and create meaningful works of art. The need to create forms of beauty allows the artist to transcend horror, improve society and envision a brighter future” –Marjorie Agosin, Stitching Resistance

“If I can’t dance to it, it’s not my revolution” –Emma Goldman

“We can and must respond creatively to the triple crisis and simultaneously overcome dehumanization, economic inequality, and, ecological catastrophe.” ― Dr. Vandana Shiva

“This might well be the hidden reason why permaculture appeals to me so much—it encourages creativity and individuality. No matter how hard some might try to deny it, no matter how forcefully we have been squeezed into one mold or another, we are at heart all wonderfully creative individuals. Permaculture allows us to celebrate this.”—Jenni Blackmore, Permaculture for the Rest of Us